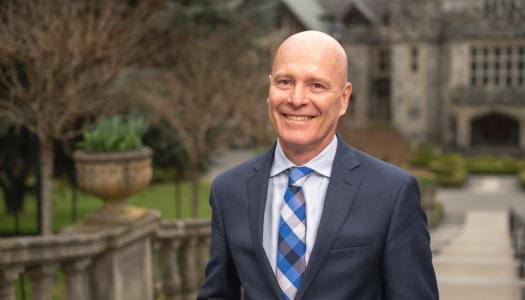 Steenkamp is a galvanizing leader with broad experience in the public service and the post-secondary sector.

He held the role of vice-president, external relations at the University of British Columbia and at Simon Fraser University.

At UBC, his portfolio included government and corporate relations, community engagement, communications and marketing, campus and community planning, and involved extensive engagement with business, industry and the community. He also held responsibility for UBC’s downtown Robson Square campus and UBC’s Downtown Eastside Learning Exchange. With oversight of UBC campus lands, Steenkamp led a comprehensive range of municipal functions, including planning, design, zoning and permitting. As a member of the UBC Properties Trust Board, he has held responsibility for residential and commercial development on university lands which generated funds for the university endowment.

Steenkamp has held senior leadership positions in multiple provincial ministries over a 17-year career in the public service. He held the office of deputy minister from 1997 to 2011, serving in a wide range of portfolios in British Columbia and Ontario.

In BC, Steenkamp’s deputy minister roles included aboriginal affairs, tourism, culture and the arts, economic and skills development, and advanced education, where he oversaw the growth of the post-secondary system by 25,000 seats – the largest such expansion since the 1960s.

In Ontario, Steenkamp served as deputy minister in the Ministry of Training, Colleges and Universities and in the Ministry of Education. He implemented Ontario’s Reaching Higher Plan — a $6.2 billion investment in post-secondary education, as well as the largest interjurisdictional transfer in Canadian history under the Labour Market Development Agreement.

As president and chief executive officer of the 2010 Olympic and Paralympic Games Secretariat, Steenkamp held provincial oversight and management of the largest event, at that time, in the world.

He has served on numerous boards and committees, including the Dr. Peter AIDS Foundation, the Immigrant Employment Council of BC, the Michael Smith Foundation for Health Research, and served as the Canadian representative on the Organization for Economic Cooperation and Development (OECD) Education Committee.