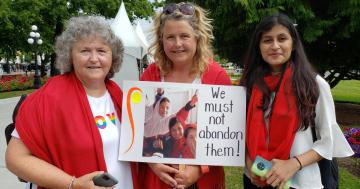 Education is a human right that should be guaranteed and protected at all times. However, governments often fail to protect human rights, particularly those of marginalized groups, such as women and children and people with disabilities in crisis. When an emergency occurs, the right to education is more likely to be violated, and children are the most affected. Children lose their families and their homes when there is a crisis. They lose access to safe drinking water, health care and food. They lose safety. They lose their childhood. And, without access to education, they risk losing their futures.

Globally, there is shocking data about children's education in crisis situations between 2015 - 2019. Over 35 million children have been forcibly displaced around the world. Nearly half of school-age refugee children are out of school. In conflict-affected countries, girls are nearly 2.5 times as likely to be out of school as girls in other places. About 75 million children live in a crisis-affected area worldwide.

In Afghanistan, the figures are even more shocking. There have been over 200 attacks involving explosive weapons on education in Afghanistan between 2018 and mid-2021, injuring or killing hundreds of students and educators and damaging or destroying dozens of schools and universities. In 2021 alone, there were over 75 reported attacks on education. Four million children (60% girls) have been out of school due to violence and other factors. Despite the violence and attacks against education, families were sending their children to school. The previous Afghan government and international partners had made progress in delivering and increasing access to education across the country. Nevertheless, the country entered another crisis after the regime change in August 2021, with education being one of the first sectors affected most severely. The Taliban, who were responsible for most of the attacks on education, gained control of the educational system. School bans for girls from secondary school and curriculum changes to accommodate Taliban ideology are the first two aspects of a regression in education. Five million girls lost access to school due to the Taliban's ban on education for girls. The humanitarian crisis has diverted the attention of the international community from the right to education. As countries focus on humanitarian crises as an immediate need, they lose sight of basic human rights, such as the right to education, which negatively impacts peace, stability, and development.

Education is an essential building block in Afghanistan’s progress toward peace, security and sustainable economic development. It is an enabling means to full development, economic growth, self-confidence, and peace-building; it is also foundational in establishing flourishing communities. As well, education can play a preventive role. School protects children from physical harm - such as abuse, exploitation, and recruitment into armed groups. In general, being in a learning environment and having social time with teachers and classmates helps students cope with the trauma they face each day.

Still, despite the enormous benefits to children, societies and entire countries, education is often the first service suspended and the last to be restored during a crisis. On average, the education sector receives less than 3 percent of humanitarian aid. Neglect of this kind has irreversible consequences. Therefore, it is important to minimize and mitigate the negative effects of the emergency situation in Afghanistan by including education in international aid efforts.