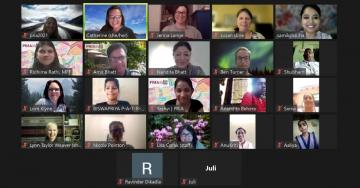 RRU’s  Master’s of Arts in Global Leadership  (MAGL) students attended an online field study,  GBLD 535 , from September to October, 2021, when the COVID-19 pandemic thwarted plans to go abroad. Through RRU’s partnership with Participatory Research in Asia   ( PRIA ), students continued learning through an online offering themed   Leadership Development from Below .

This is the second part to a blog covering the excursions. One of the excursions was with the Youth Leadership for Safety of Girls and Women in Public Spaces – Kadam Badhate Chalo Campaign. Students learned forty-two incidents of crimes against women are reported every hour in India, reported by the National Crime Records Bureau in 2018, as compared to 21 cases per hour in 2007. Young girls and women face harassment in various forms by their own families, their peers and community.

Given that India is home to 356 million young people, the world’s largest, of whom 243 million are adolescents, youth are critical stakeholders in efforts to end violence against women and girls (VAWG). MAGL students learned about Kadam Badhate Chalo - KBC (Take Your Steps)’s work, an adolescent-led programme to end VAWG, active in 30 locations of 14 Indian states, through their course hosted by PRIA and through the efforts of the Martha Farrell Foundation (MFF). It calls on young boys and girls to identify issues of VAWG in their communities and collectively find solutions to them. In doing so, these young boys and girls evolve as leaders, who influence their homes, communities, government, police, judiciary, and other institutions to join them to bring about a change. It is designed to reach out to and influence the attitudes of all individuals directly linked to the everyday lives of children and young people.

Students interacted with some of the adolescent leaders from Panipat, Haryana, as well as a teacher and a village leader to hear their experiences. Students shared how they work collaboratively across genders and age groups to find solutions to end VAWG in their homes, schools, and communities, through engagement, dialogue, and significance of their work and research, such as conducting Participatory Safety Assessment/Audit of their schools and communities and sharing the findings with decision makers.

In the village the youth conducted the Participatory Safety Assessment/Audit by doing a Participatory Safety Map of the area, they collected information from boys and girls to map out the areas identified as safe and unsafe spaces. The results showed a critical gap in understanding of the safe and unsafe areas between boys and girls. This became a tool for education around safety issues. As an evidence-based map, it illustrated needs for safety among the local representatives of the area. Although, the youth said that it was not an easy process of much negotiation, streetlights were eventually put in place where girls felt unsafe walking to school or unsafe walking past 6 pm. A liquor store was also moved to the outskirts of the village as a result of this research on its impact on safety and the subsequent campaign driven by youth to move it.

To broaden the education and outcomes, youth expressed their learnings in poetry and pictures shared with parents, siblings, grandparents, and extended family, as well as others through Instagram to mobilize youth. A youth explained that she was not allowed to study engineering due to gender-based discrimination and assumptions around what would be best. Through the program, she learned how to educate her family on why it was suitable for her. In the process of learning, she also discovered what harassment is, that she in fact had been harassed, and then made it a mission to educate others by raising awareness, also through research.

A teacher who joined the sessions attested to the changes among students in her school and told of how she provides readings and poetry to support the shift among youth and society. Among those MAGL students engaged with was also the village leader, who said he was unaware of the several issues brought forward, and around which propelled him to make changes. As the participants affirmed, it is through such small steps that change in society happens.

Special thanks to the PRIA instructors and community partners who translated and facilitated conversations with community groups throughout the course:

We would like to acknowledge and express our gratitude to Amit Bhatt, Kaustuv Bandyopadhyay, Sumitra Srinivasan, and RRU Adjunct Professor, Rajesh Tandon on the PRIA side for their work developing the course, as well as Lisa Corak, Wanda Krause, Catherine Etmanski, and Sherry Richards on the RRU side. And our special thanks goes to Wendy Rowe and Lisa Corak for their work designing the original GBLD 535 field studies in Ecuador.

Blog post photo included with the permission of the participants .